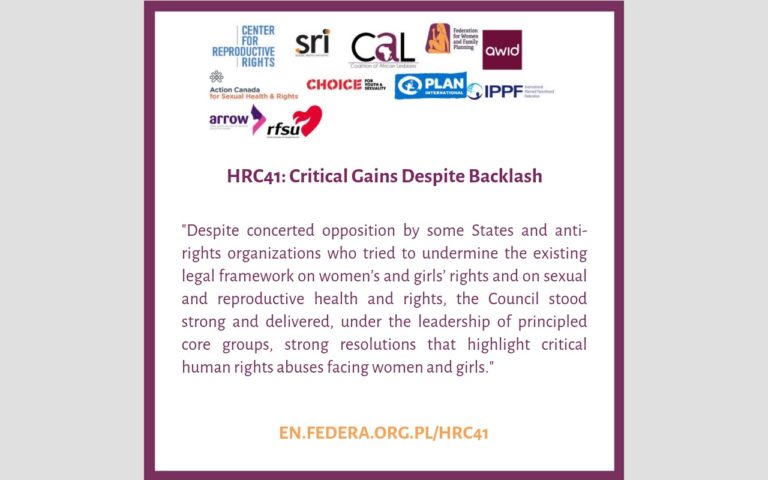 Despite concerted opposition by some States and anti-rights organizations who tried to undermine the existing legal framework on women’s and girls’ rights and on sexual and reproductive health and rights, the Council stood strong and delivered, under the leadership of principled core groups, strong resolutions that highlight critical human rights abuses facing women and girls.

Standards on the right to sexual and reproductive health, women’s and girls’ full, effective and meaningful participation, substantive equality, bodily autonomy and comprehensive sexuality education were upheld and reinforced, despite numerous amendments against them that were defeated across these three resolutions. Moreover, this session provided an opportunity to consider the impact criminalization has on the lives and rights of women and girls. The resolution on DAWG calls upon States to repeal all laws that exclusively or disproportionately criminalize the actions or behavior of women and girls, and laws and policies that discriminate against them, based on any grounds, including any custom, tradition or misuse of culture or religion.

The resolution on Child, Early and Forced Marriage recognizes that the criminalization of child, early and forced marriage alone is insufficient when introduced without complementary measures and support programs and may instead contribute to the marginalization and loss of livelihood for the families affected and have the unintended effect of increasing the practice of informal unions or unregistered marriages. This focus on the impact of criminalization echoes calls from civil society organizations (CSOs) to move away from a criminalization framework that disproportionately harms women and girls, especially those facing multiple and intersecting forms of discrimination, towards frameworks focused on addressing root causes, and patriarchal social norms that enable discrimination and violence against women and girls, as well as accountability measures and access to reparations and remedies.

The resolution on DAWG, this year focusing on women’s and girls’ deprivation of liberty, recognizes, inter alia, the prohibition of gender-based discrimination within international human rights law and that the right to liberty is a human right recognized in international instruments that is inextricably linked to other human rights, including to the right to sexual and reproductive health. It firmly recognizes that discrimination against women and girls is rooted in patriarchal gender norms that underpin gender-biased environments which promote impunity and impede the implementation of legislative and normative frameworks that guarantee women’s and girls’ human rights. It further recognizes the ways multiple and intersecting forms of discrimination against women and girls can lead to their deprivation of liberty in detention facilities and also in other public and private institutions, private homes and communities and in situations of conflict and crisis.

Critically, the resolution sets out the linkages between discriminatory deprivation of liberty and women’s and girls’ exercise of their sexual and reproductive rights and bodily autonomy as set out in the Working Group on Discrimination against Women’s latest report.

The resolution on Violence Against Women and Girls (VAWG) in the world of work, recognizes, inter alia, that violence against women and girls is a global phenomenon rooted in historical and structural inequality in power relations between women and men, which further reinforce gender stereotypes and barriers to women’s and girls’ full enjoyment of all human rights. It also recognizes that violence, including sexual harassment and domestic and intimate partner violence, undermines the full realization of the right to work. The resolution also reaffirms that human rights include the right to have control over and to decide freely and responsibly on matters relating to sexuality and to attain the highest standard of sexual and reproductive health free from coercion, discrimination and violence, including full respect for dignity, integrity and bodily autonomy and urges States to develop and implement educational programs and teaching materials that raise awareness about violence in the world of work, including through evidence-based comprehensive sexuality education, consistent with the evolving capacities of the rights of the child.

The resolution on CEFM, focusing on the consequences of CEFM, recognizes, inter alia that, in some contexts, the practice of child, early and forced marriage may include informal unions, cohabitation or other arrangements that are not formalized, registered or recognized by a religious, customary or State authority, that such arrangements should be addressed in policies and programs on child, early and forced marriage within a human rights-based approach. It also reiterates that CEFM is a violation, abuse and impairment of human rights that has adverse consequences a on wide range of human rights, including on the right to sexual and reproductive health and that investing in, inter alia, the full, effective and meaningful participation [of women and girls] in all decisions that affect them as critical to break the cycle of discrimination and gender inequality. The resolution also urges States to protect women and girls from intimate partner violence and calls upon States to ensure that married and/or pregnant adolescents and young mothers, as well as single mothers, can continue and complete their education.

The resolution further urges governments to respect, protect and fulfil the right to the enjoyment of the highest attainable standard of physical and mental health, including the right to sexual and reproductive health.

These gains were achieved in a highly politically charged environment, with conservative States and CSOs alike trying to instrumentalize women’s and girls’ rights as a means to create rifts between human rights organizations and progressive States. Conservative States are dissociating themselves from paragraphs in these resolutions focusing on sexual and reproductive health and rights and on the autonomy and participation of girls in a bid to weaken the consensual nature of these texts, all the while using cultural relativism as their main rationale.

In the midst of these political dynamics, now more than ever is the time to re-emphasize the universality, interdependence, indivisibility and interrelatedness of human rights, and to create global solidarity across movements. The backlash against the rights of women and girls is only just beginning, and our movements are only as strong as our unity. We commend the leadership of the core groups leading on these resolutions and the refusal of the Human Rights Council to yield to retrogressive pressures.

We call on States to build on the significant normative advances contained in these resolutions and to continue and increase their collaboration with human rights and women’s and girl’s rights organizations as well as feminist groups and youth-led organizations. 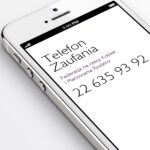